A couple weeks ago Sebastopol had their Gravenstien Apple Festival at Ragle Ranch Park.  As we approached we noticed that a lot of people were parking on the streets and walking, I thought that they were too cheap to pay for parking.  Then when we entered the park I noticed that there was no fee for parking!  How cool is that!

The Festival was a nice size, great activities and things for the little ones to do too.  When we entered there was an Apple Sauce eating contest that was just starting.  I wondered how they were going to pull this off since they said “no hands”.  Luckily they realized what they were saying and allowed the contestants to use one hand to hold the Apple Sauce jar.

A little later in the day they had the Pie eating contest –  this was a traditional pie eating contest with NO HANDS!  Most contestants were children but they recruited a couple adults to compete also.     Everyone was really enjoying eating their pies.

Right after the pie eating contest they started setting up for a Caramel apple eating contest.  Finally, something you could really sink your teeth into.  One little fellow couldn’t even wait for the start and was nibbling the caramel and apple ahead of time.  Click here to see more photos from the festival. 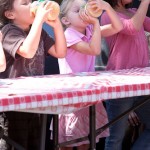 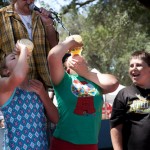 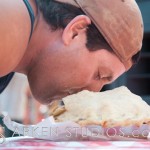 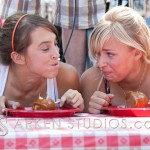 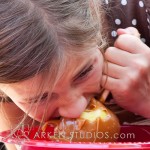 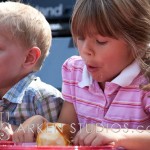